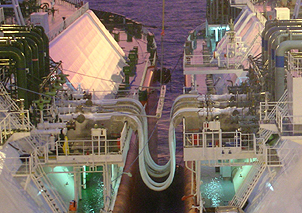 The sea can be a dangerous place to make a livelihood, and this does not only apply to those who spend a good part of their days navigating those waters. Even at the docks, loading and unloading tankers hold dangers that are just as real. This is where a marine breakaway system comes in. In case of any dangers, this system activates itself and acts to prevent losses. You can forget about the cost of spillage since the marine breakaway system prevents this. As a consequence, the system also reduces the risk that these spills cause to the environment, and saves you the time that would have been used to clean up the mess.

You will also be spared equipment damage costs and injury management costs as the system prevents the two things from happening. Fluid transfer systems are now safer than they ever were thanks to Marine Breakaway Couplings (MBC). KLAW Products is the global leader in the design and manufacture of Breakaway Couplings, Emergency Release Couplings and Dry Break Couplers; all vital components in the safe transfer of hazardous and non-hazardous materials. They automatically activate in case of an emergency and stop the fluid flow until the problem at hand is rectified. Here is more information on marine breakaway systems.

How does it Work?

The heavy loads transported by sea can sometimes cause trouble when being loaded and unloaded into a vessel. In the case of fluid transfer systems, this could be caused either by extreme pressure, or loading equipment failure. The MBC is set in such a that when the pressure set on it is exceeded by the fluid being loaded, this system activates and releases some tension from the loading hose system to prevent it from rapturing. The best thing about the MBC is that it’s independent. If all the employees have to evacuate the site, then the system will function perfectly on its own without assistance.

The breakaway system comes in many forms and for different reasons. The two most common ones are the Petal Valve and the Flip-Flap Valve types.

When transporting highly viscous products like crude oil, this system would bestsuit your needs. It is designed to have a full bore, meaning that the Petal Valve Type system is not only fully Piggable, but it also has zero headloss.

Unlike its counterpart, this type of system is suitable for products with lower viscosity. These include Kerosene and LPG. This system also has its advantages. For instance, there is 100 percent shut-off, and a very low amount of headloss.

There are a number of options when it comes to choosing transfer systems. You can choose an Emergency Release Coupling, or you can choose an MBC. The advantage that the latter has over the former is that it allows for separation and controlled flow of fluids. The MBC will not fail you- anytime there is a pressure surge or any other disturbance in the transfer system, the Breakaway Coupling will activate itself and prevent spillage, employee injuries, environmental damage, and asset damage. The advantages go on, for in activating itself, the MBC also prevents transfer delays that would have been incurred if, say, crude oil had spilt all over the transfer area.

The government is imposing strict regulations concerning environmental damage. Soon, there will be legal requirements that will be set to prevent, or rather minimize, the damage that is caused to the natural surroundings of marine environments. Taking the necessary measures and installing a Marine Breakaway System into the offshore transfer system will prevent a lot of unnecessary costs, including any legal costs that may arise from too much spillage.